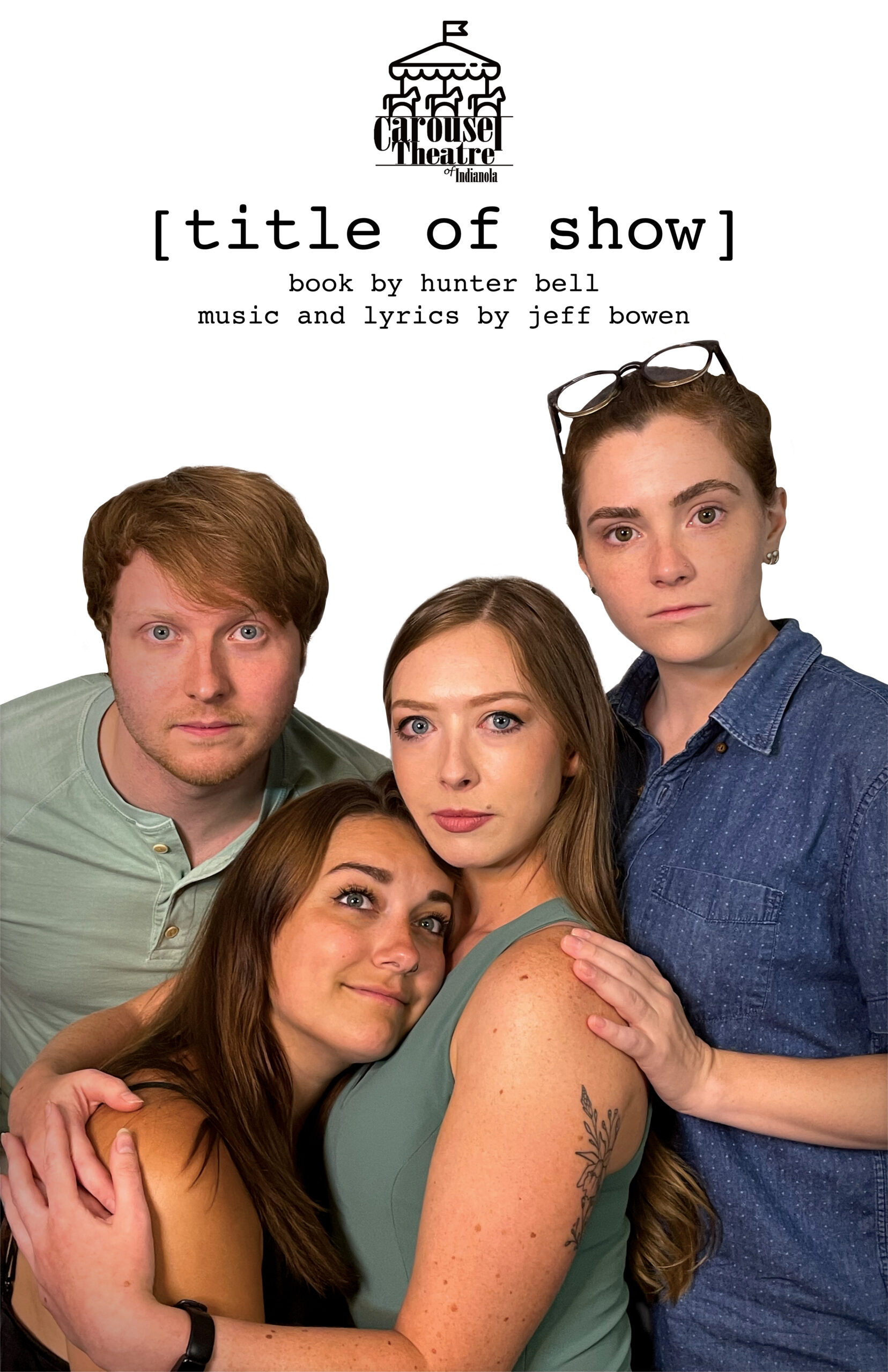 By: Jeff Bowen and Hunter Bell 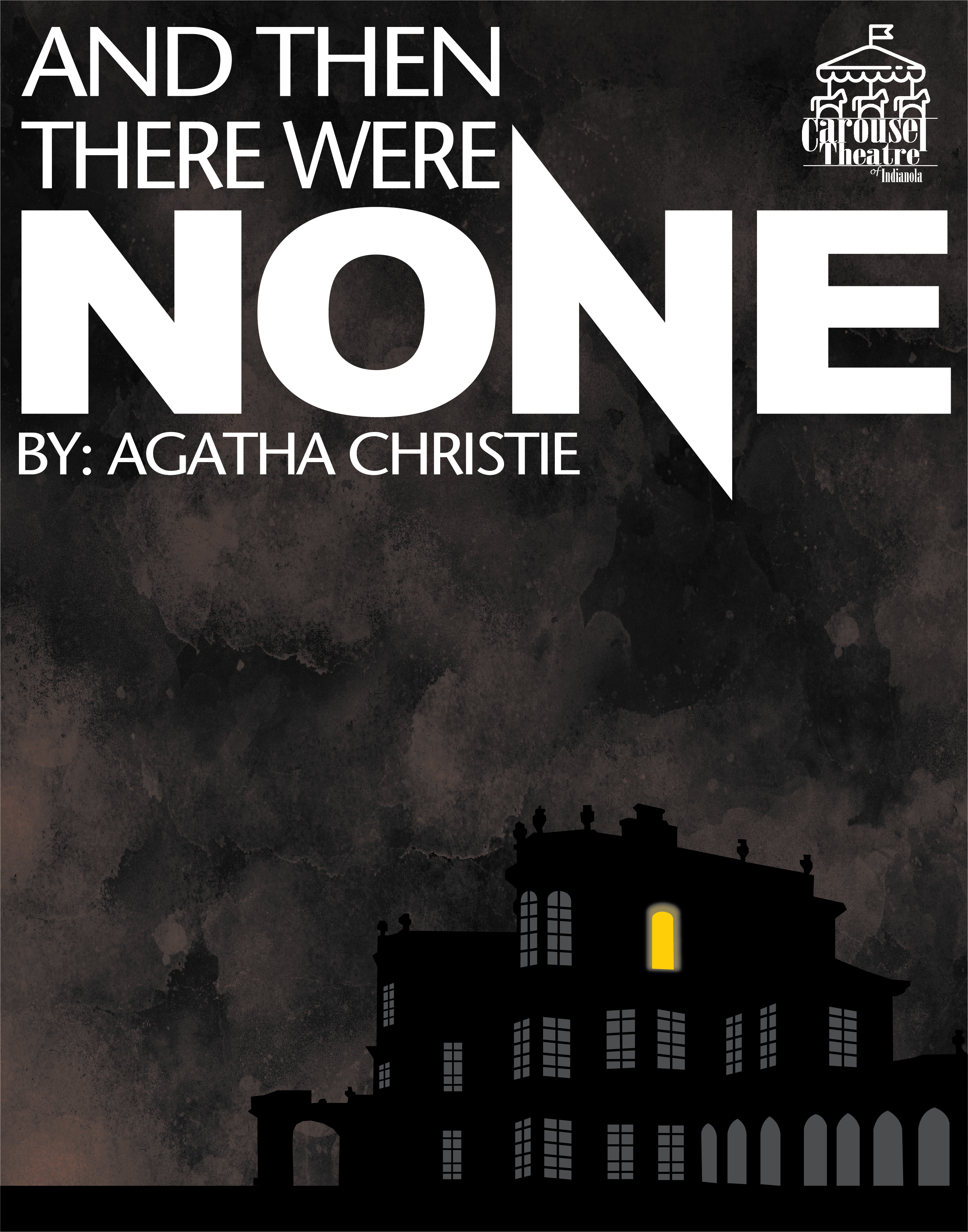 And Then There Were None

Ten strangers are lured to a desolate island estate where they are marooned, then each in turn accused of a prior murder by a mysterious voice.  One by one the “ten little soldiers” are themselves murdered, their fates described in a nursery rhyme, while those remaining fight for survival.  The excitement starts like a thunderclap and never lets up as the rhyme moves toward the final verse, “And then there were none.” 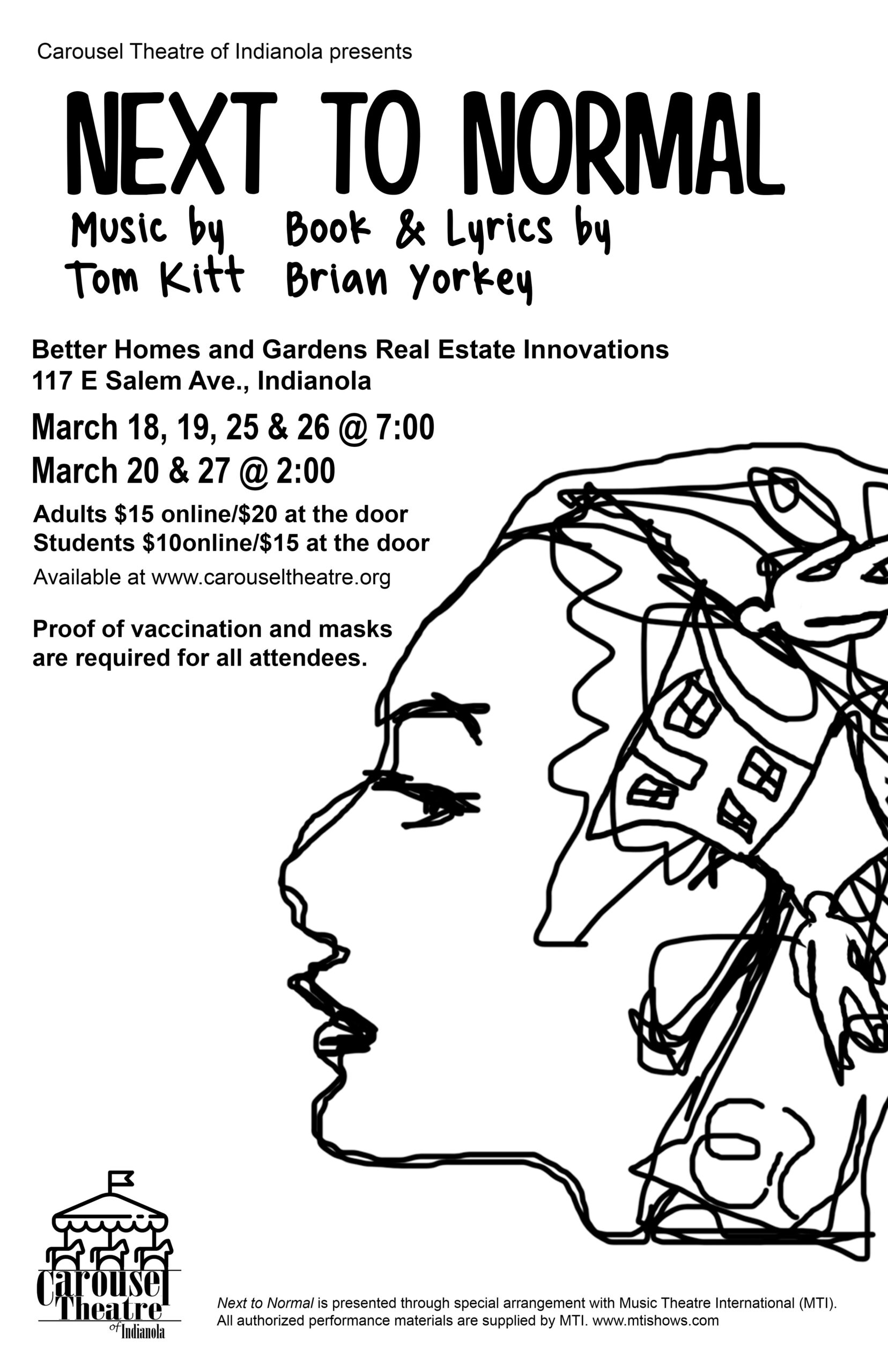 By: Brian Yorkey and Tom Kitt

Next to Normal by Brian Yorkey and Tom Kitt and directed by Chris Williams presents the ideas of loss and mental health within a small family unit, and how different people cope with personal traumas. With beautifully written music and lyrics, the show allows audiences to explore the minds of the Goodman family as they are forced to address their own battles. 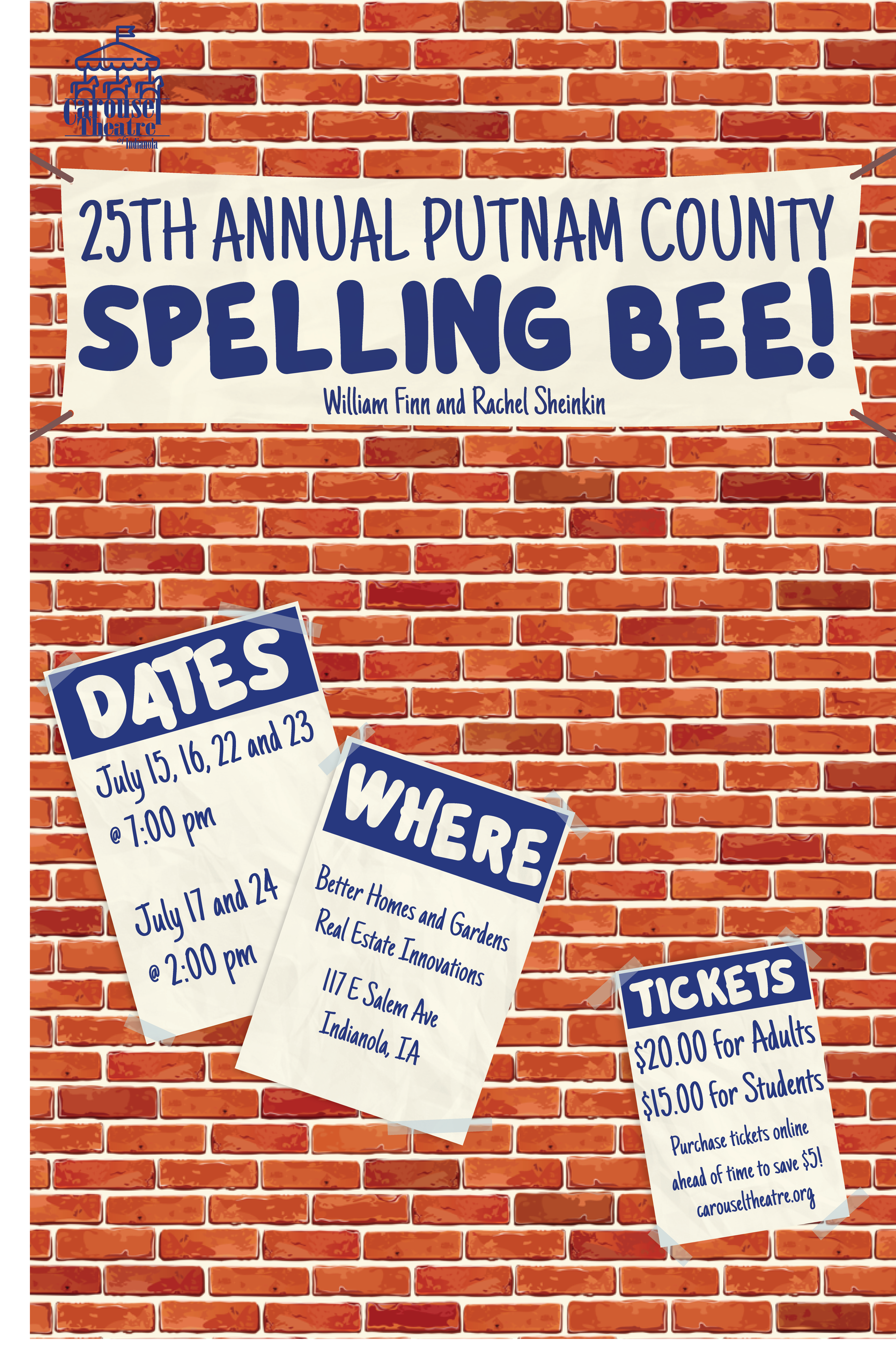 By: William Finn and Rachel Sheinkin

It’s time for the 25th Annual Putnam County Spelling Bee! Join us as 6 competitors take the stage for a chance to compete at Nationals! Carousel Theatre is excited to present this fun and witty musical, sure to leave you laughing. Written by William Finn and Rachel Sheinkin, directed by Shawn Pavlik and music directed by Alison Buechler, we follow 6 elementary school students as the attempt to take home first place of their local spelling bee. Filled with wild and over the top characters and a great score, this show is sure to be a must see! 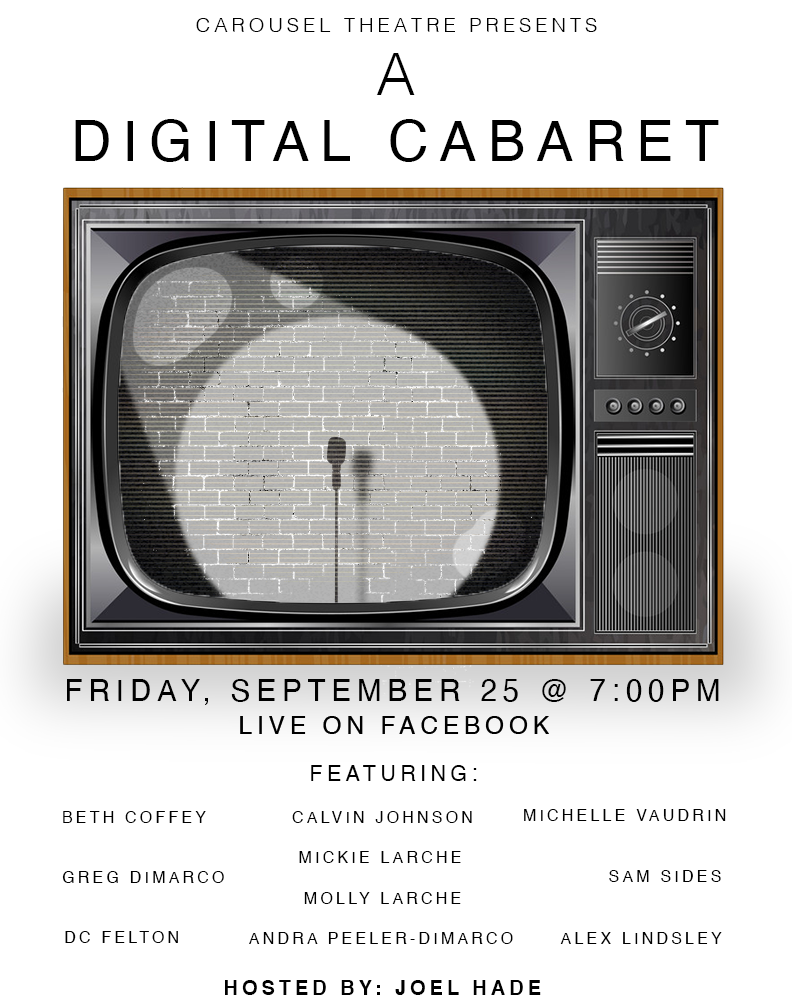 Carousel Theatre was proud to present A Digital Cabaret. An evening of socially distanced music and fun for everyone! 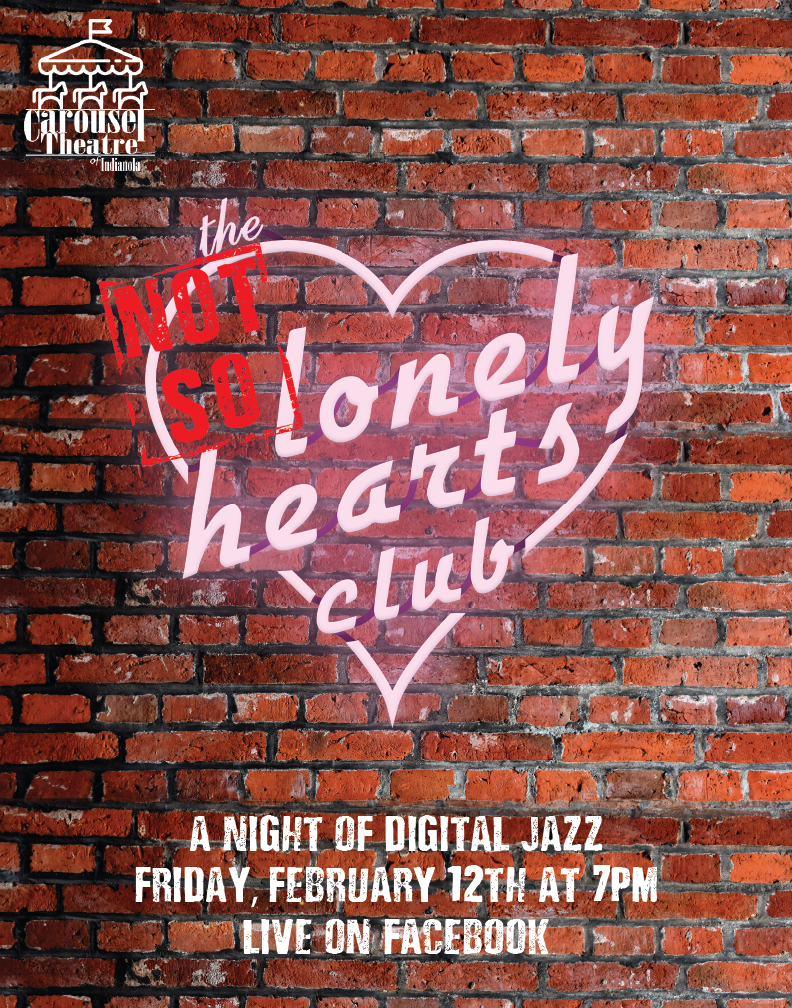 The (Not So) Lonely Hearts Club Cabaret

Carousel Theatre was proud to present The (Not So) Lonely Hearts Club Cabaret. A live stream jazz cabaret celebrating love and Valentines Day featuring a number of incredible performers! 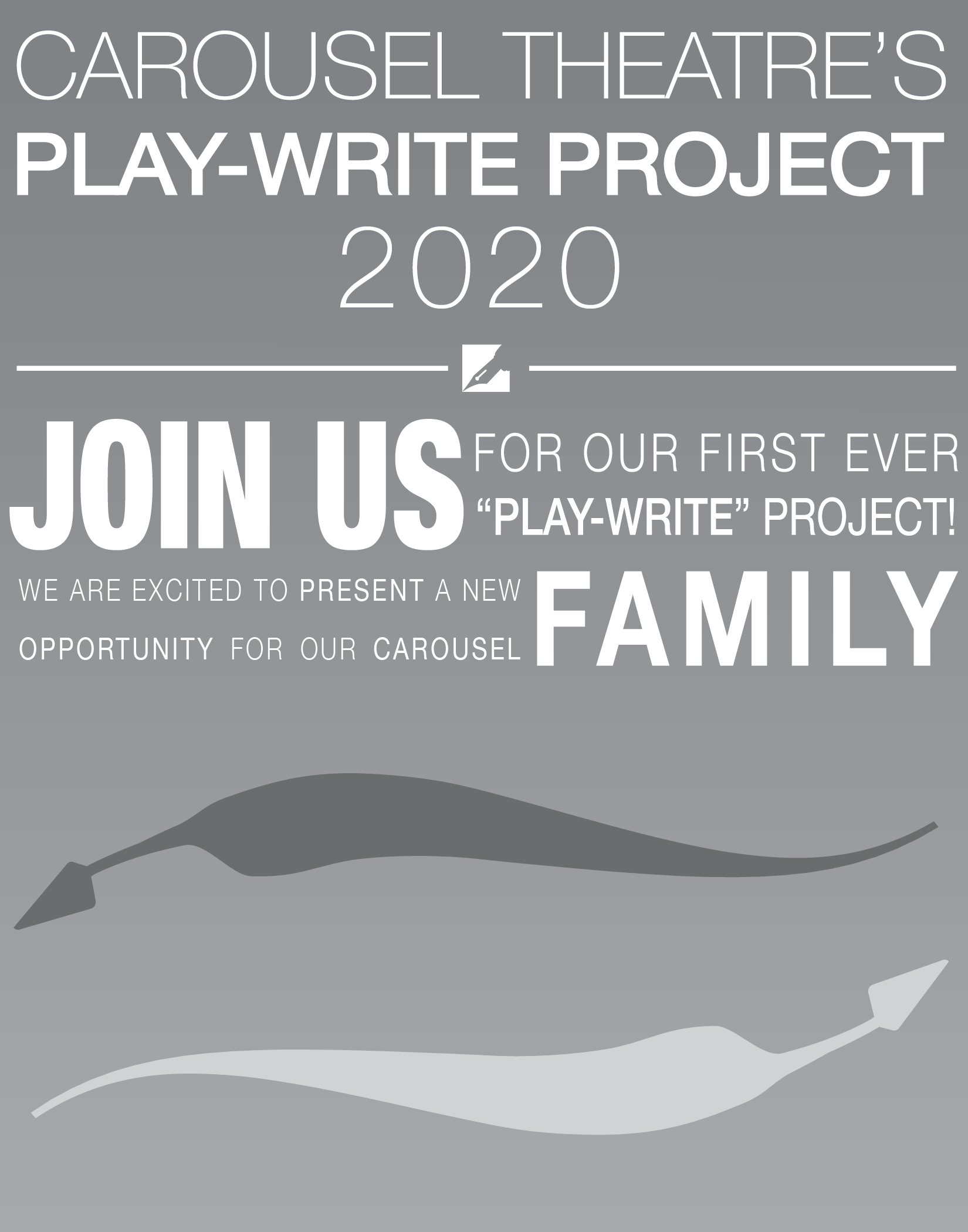 Carousel Theatre took on a new and exciting challenge by hosting a group of five budding playwrights in our new creative endeavor, The Play-Write Project. Presented virtually on Facebook and Youtube over July and August in 2021. 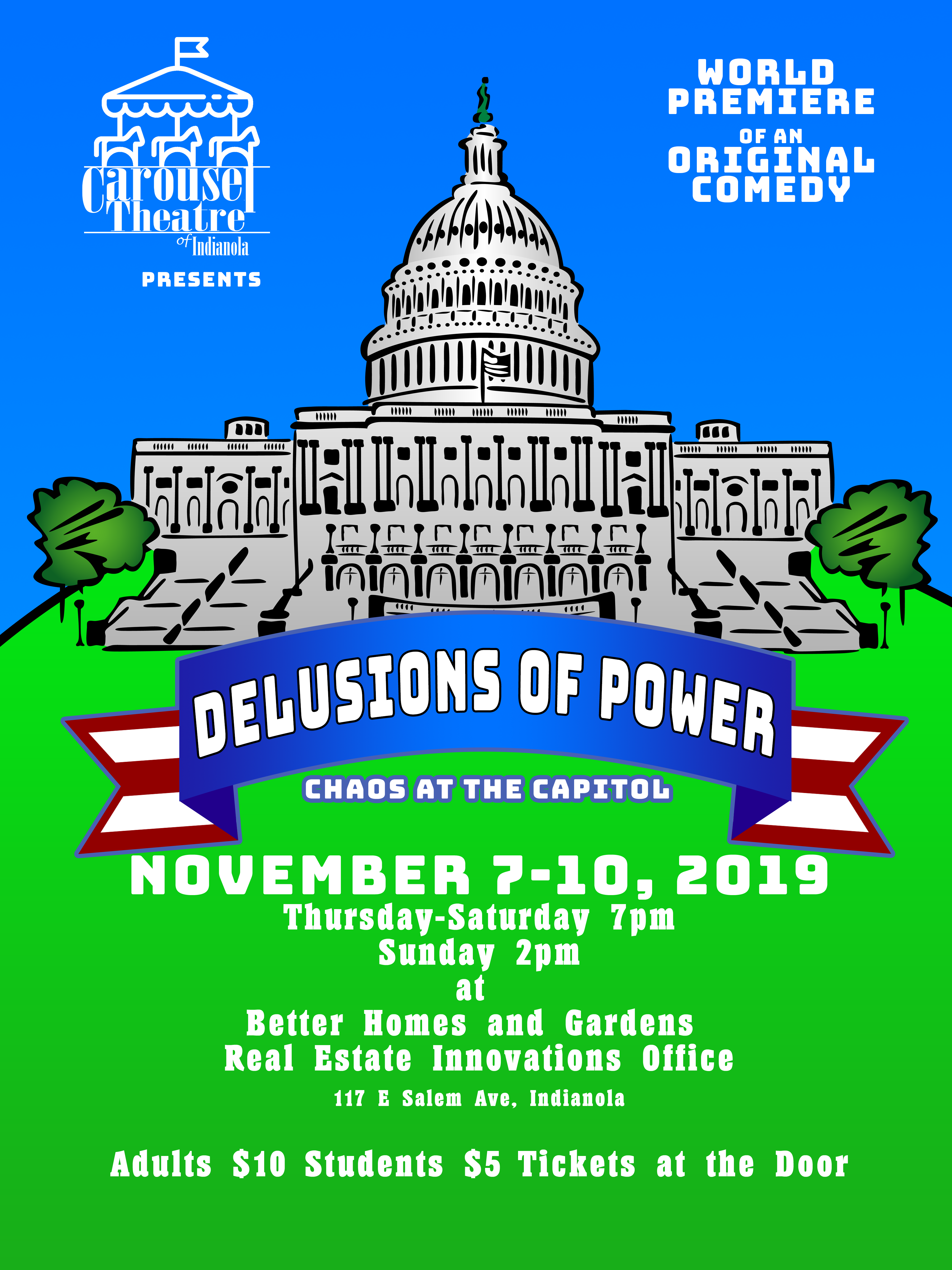 Written and Directed by David Dubczak 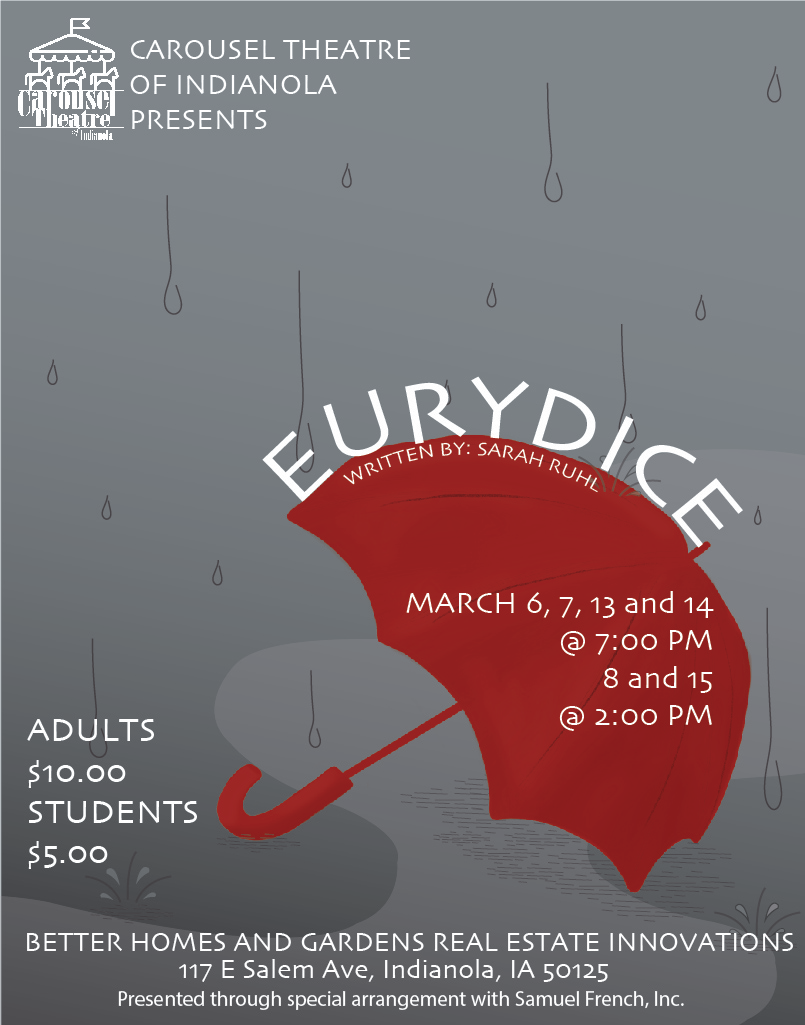 Carousel Theatre of Indianola is proud to present Eurydice, by Sarah Ruhl, directed by Chris Williams and assistant directed by Emma Norman. A retelling of the classic Orpheus and Eurydice Greek tragedy, the story follows as Eurydice suddenly dies on her wedding day and finds herself in the underworld. There she has all memories of her past life ripped away from her,  including those of her new husband Orpheus. Shortly after arriving, she is reunited with her father , and we watch as he struggles to remind her of all the things she has lost. 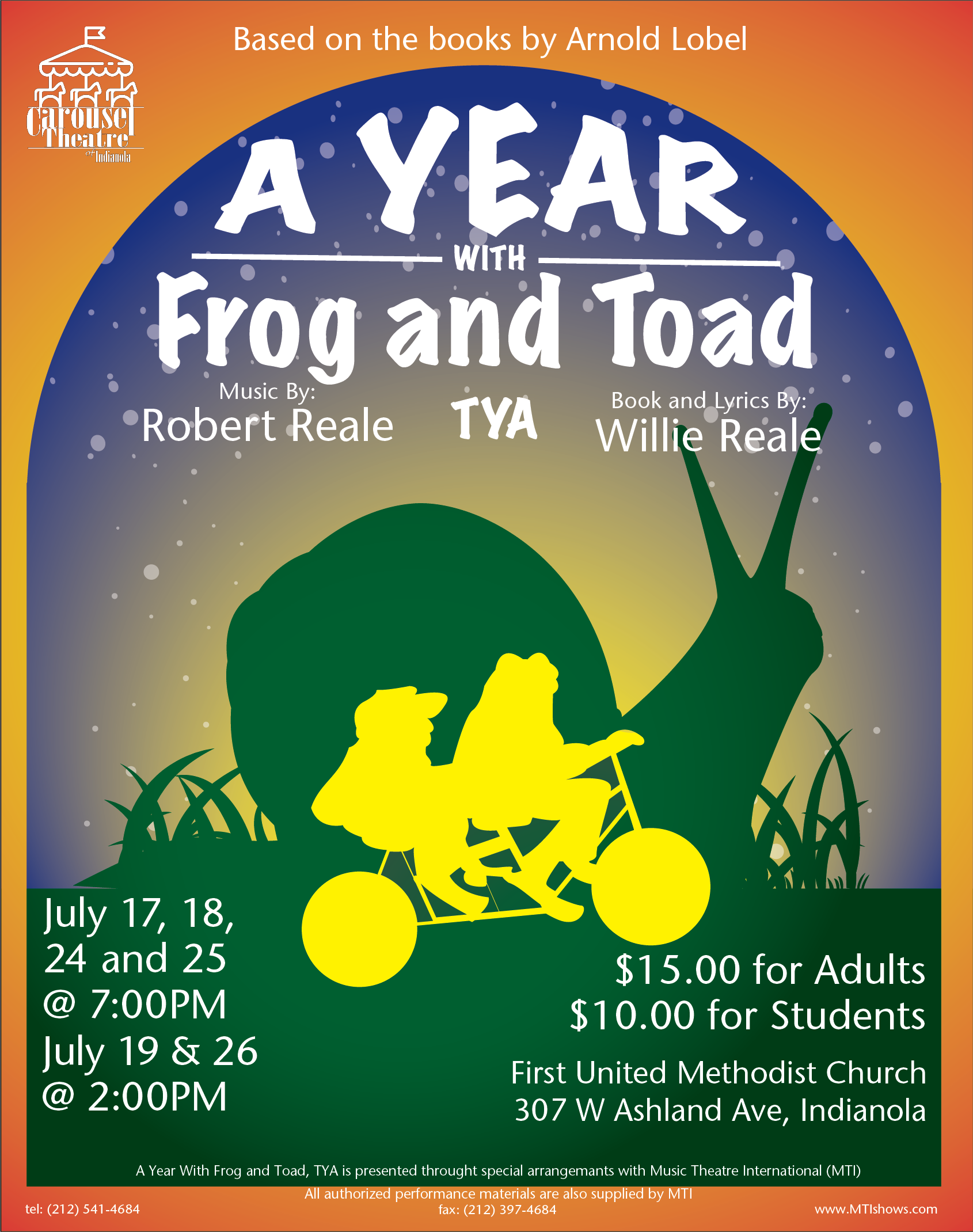 A Year With Frog and Toad, TYA

By: Robert and Willie Reale

A Year with Frog and Toad TYA, written by Robert and Willie Reale and based on the books by Arnold Lobel, follows a year in the life of best friends Frog and Toad. Frog and Toad plant gardens, go swimming, bake cookies and go on adventures with the other creatures living by the pond they call home. 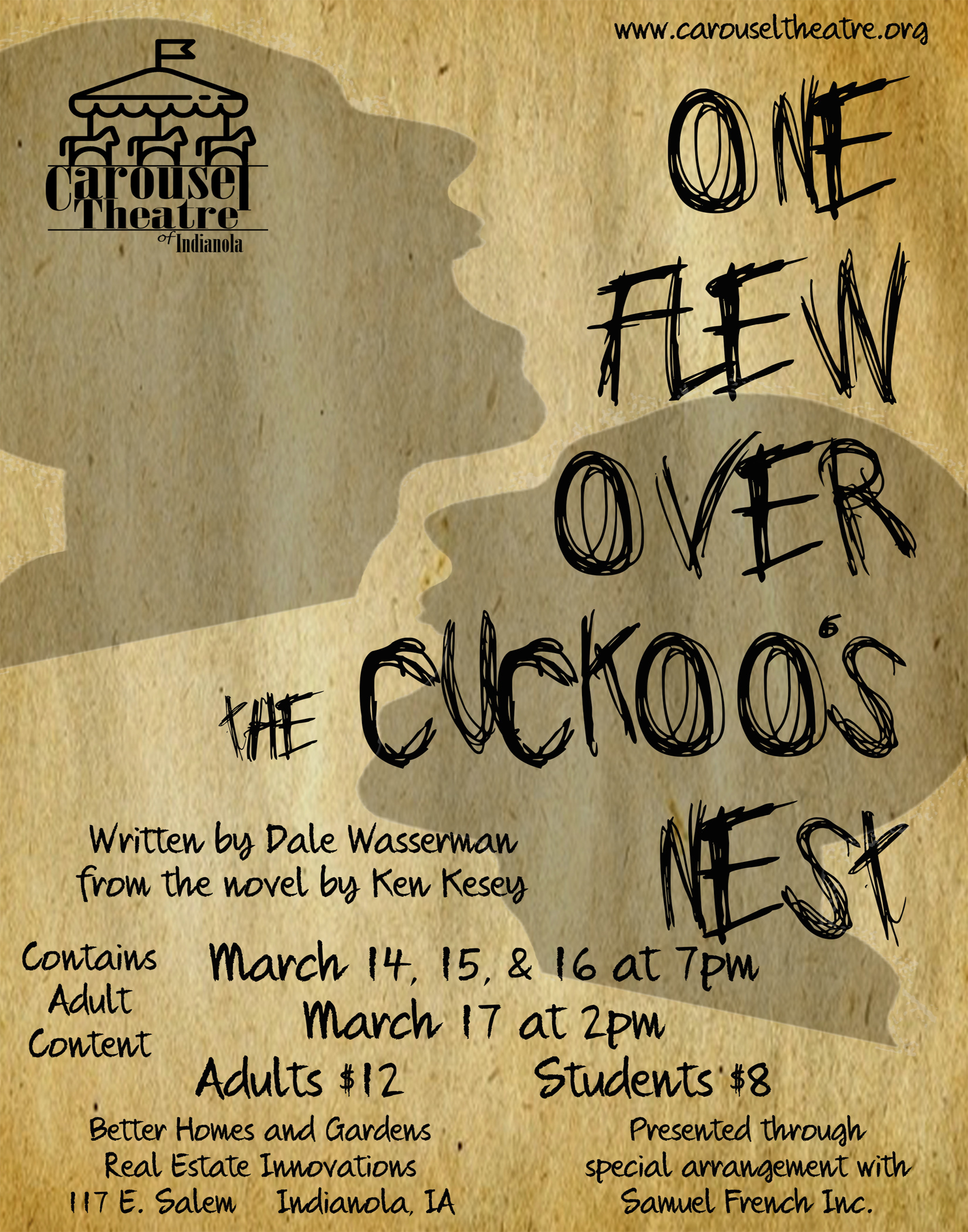 One Flew Over the Cuckoo's Nest

Based on the novel by Ken Kesey, Once Flew Over the Cuckoo’s Nest tells the story of Randle Patrick McMurphy, a rebellious prisoner, after he has been transferred to a state mental hospital for evaluation. Once there, his conflict with Nurse Ratched, the iron-fisted and inflexible nurse in charge of the psychiatric ward, begins to affect those around them. Winning over his fellow patients, McMurphy helps them in facing their individual struggles, all while suffering from his own. 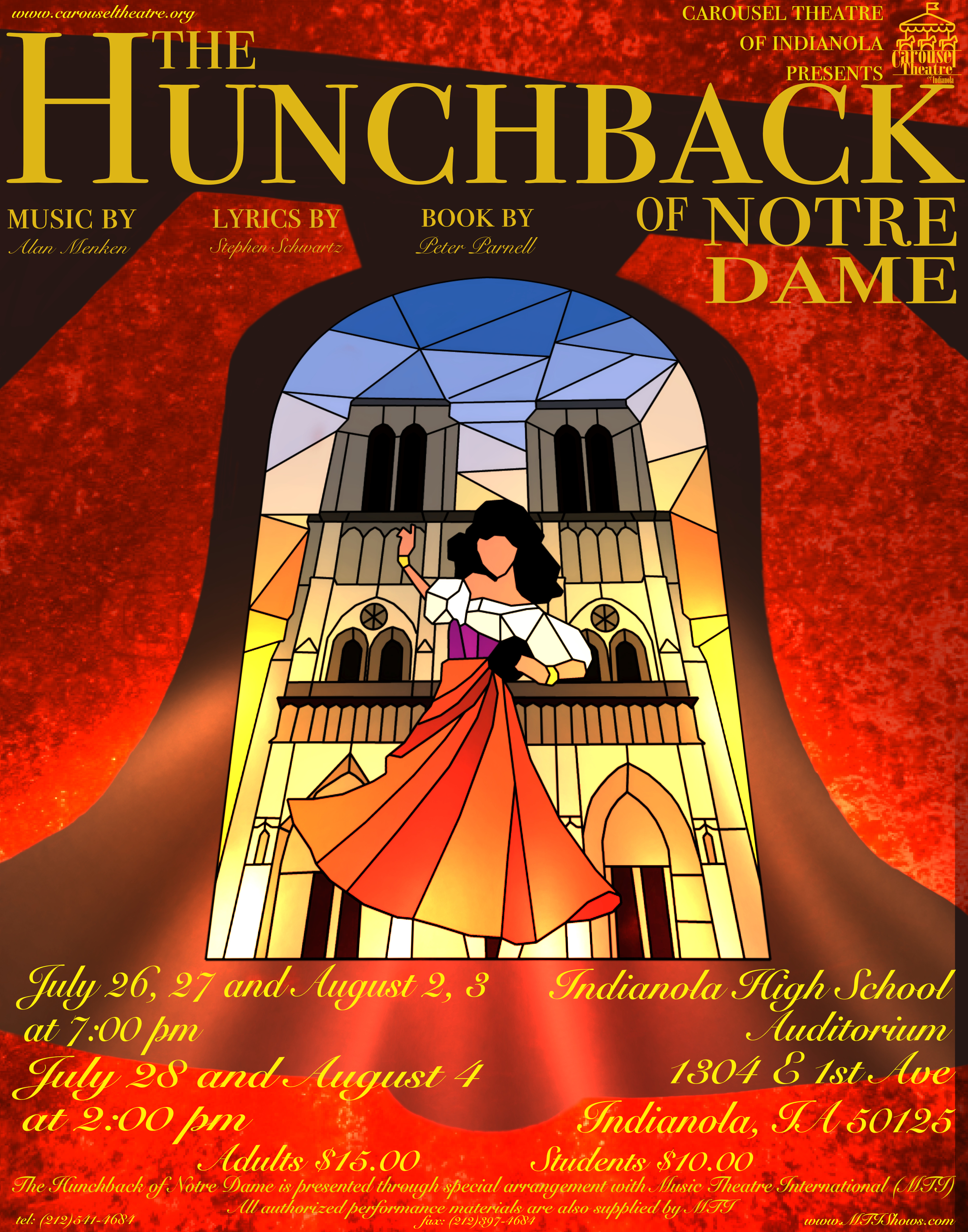 The Hunchback of Notre Dame

Carousel Theatre of Indianola is proud to present The Hunchback of Notre Dame. A musical retelling of the classic novel by Victor Hugo, with familiar songs by Alan Menken, lyrics by Stephen Schwartz, and book by Peter Parnell. 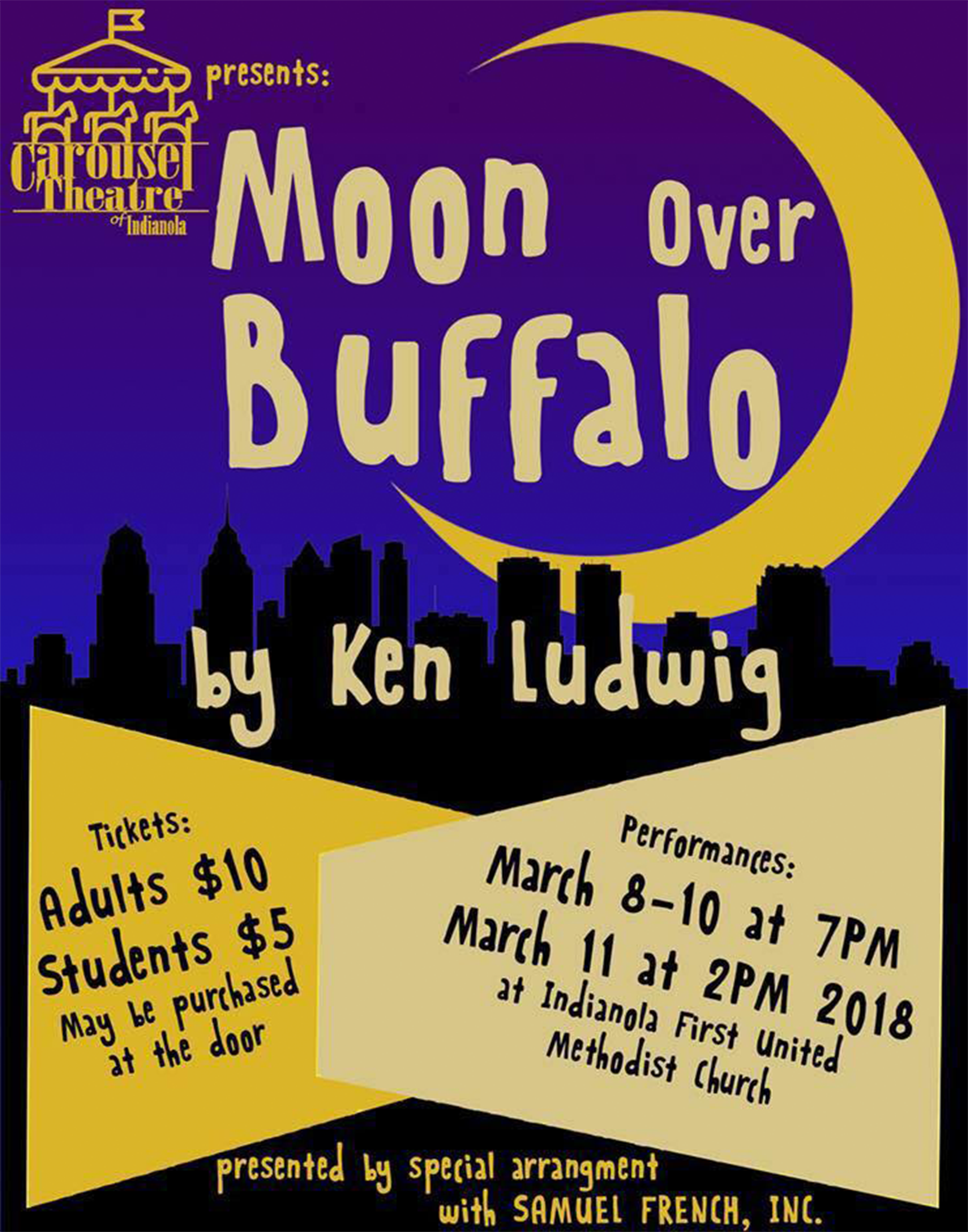 A fun and zany farce by Ken Ludwig, Moon Over Buffalo follows as two washed up actors, George and Charolette Hay, set up shop in Buffalo, New York only to have their world come crashing down around them when their daughter comes to visit. Filled with over the top characters and plenty of miscommunication, this show is sure to leave your sides hurting. 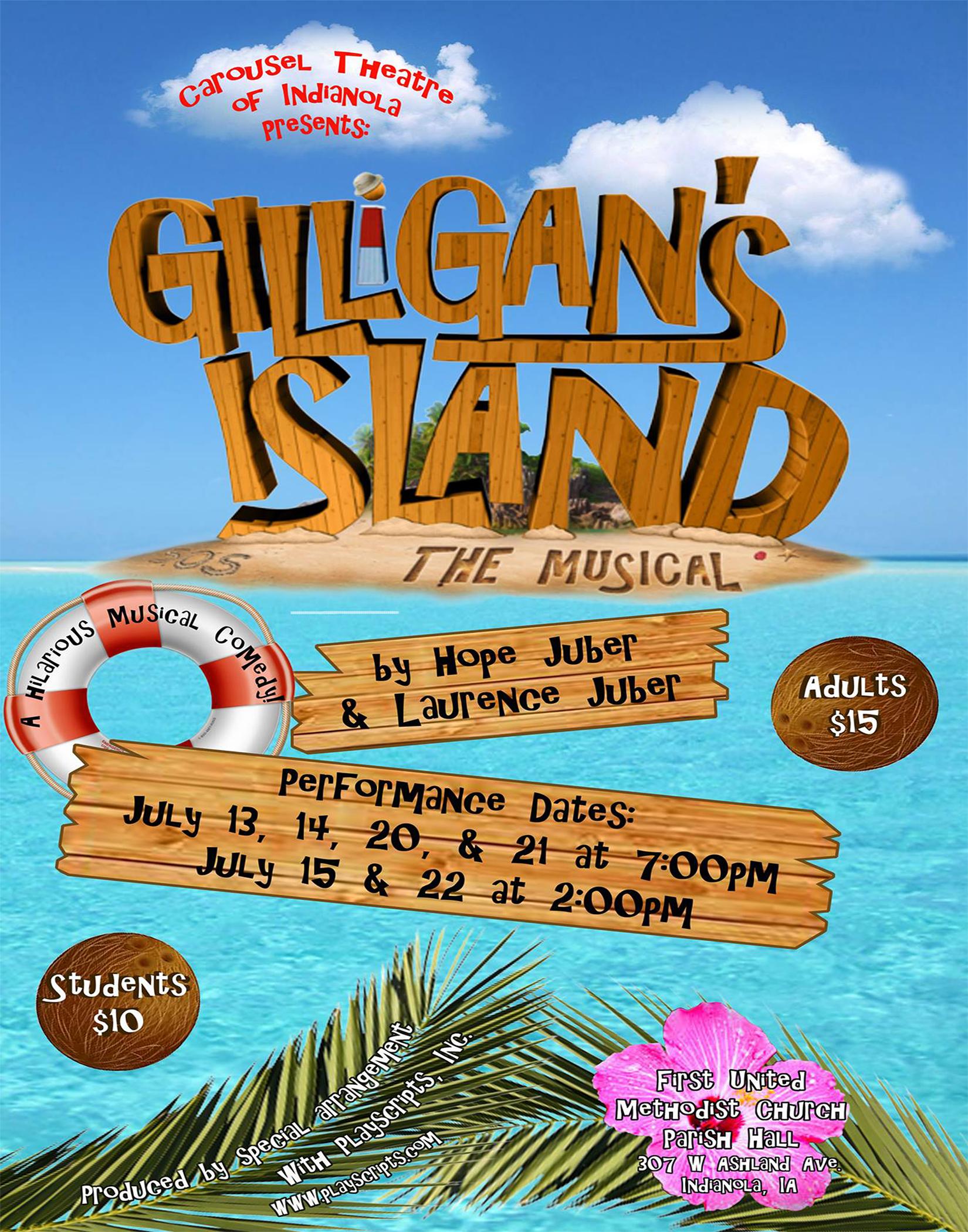 By: Hope and Laurence Juber 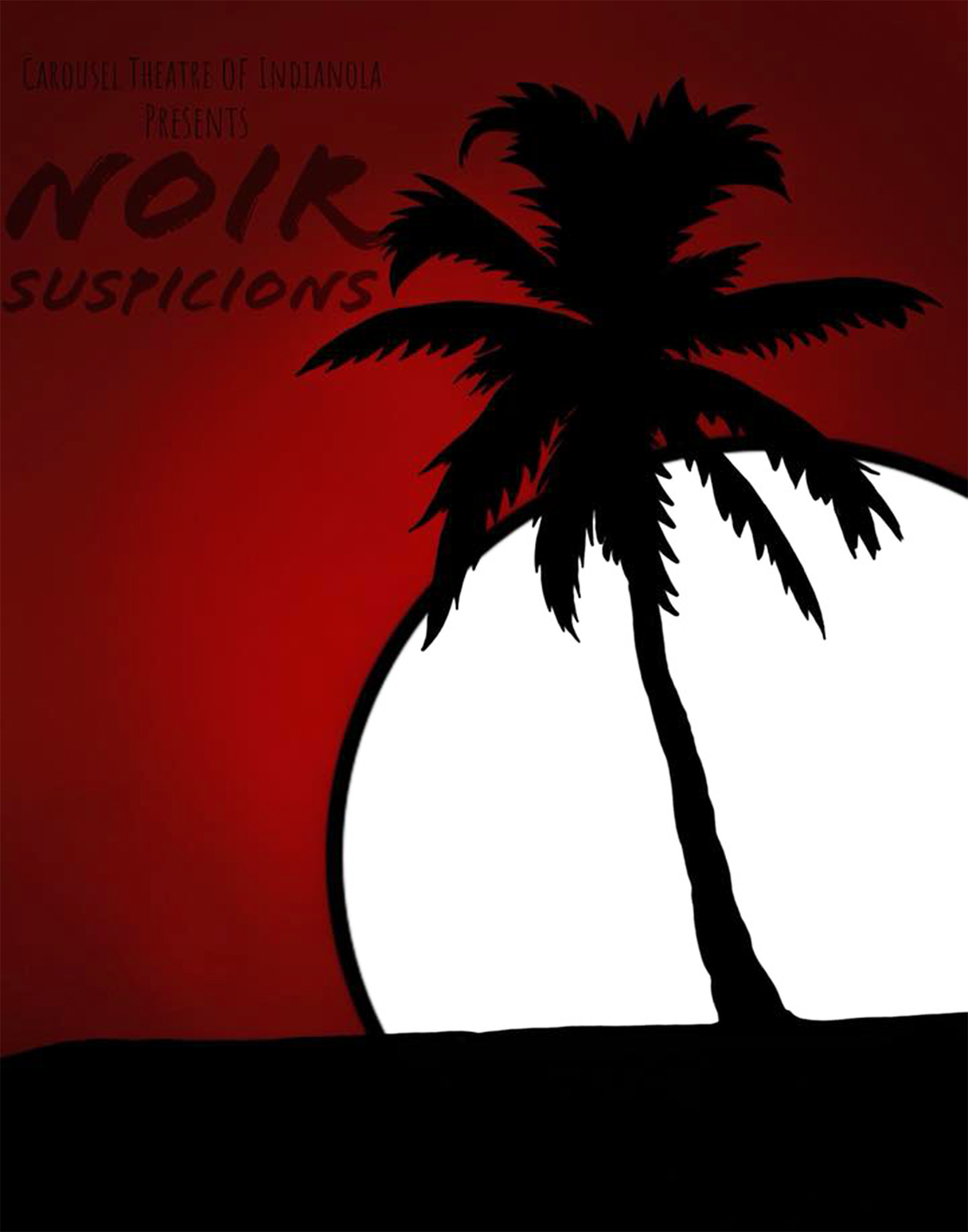 by: David Landau and Nikki Stern

Noir Suspicions is an exciting murder mystery following Richard Archer “Just Plain Rick”, Sheila Wonderly, Anthony Cairo, Sydney Ferrari, the Deputy Inspector Rigfield, Ingrid Laszlo, Judge Koch and all the rest. Come see all the confusion when a dead man’s body is found on the docks, and our characters are forced to figure out whodunit. 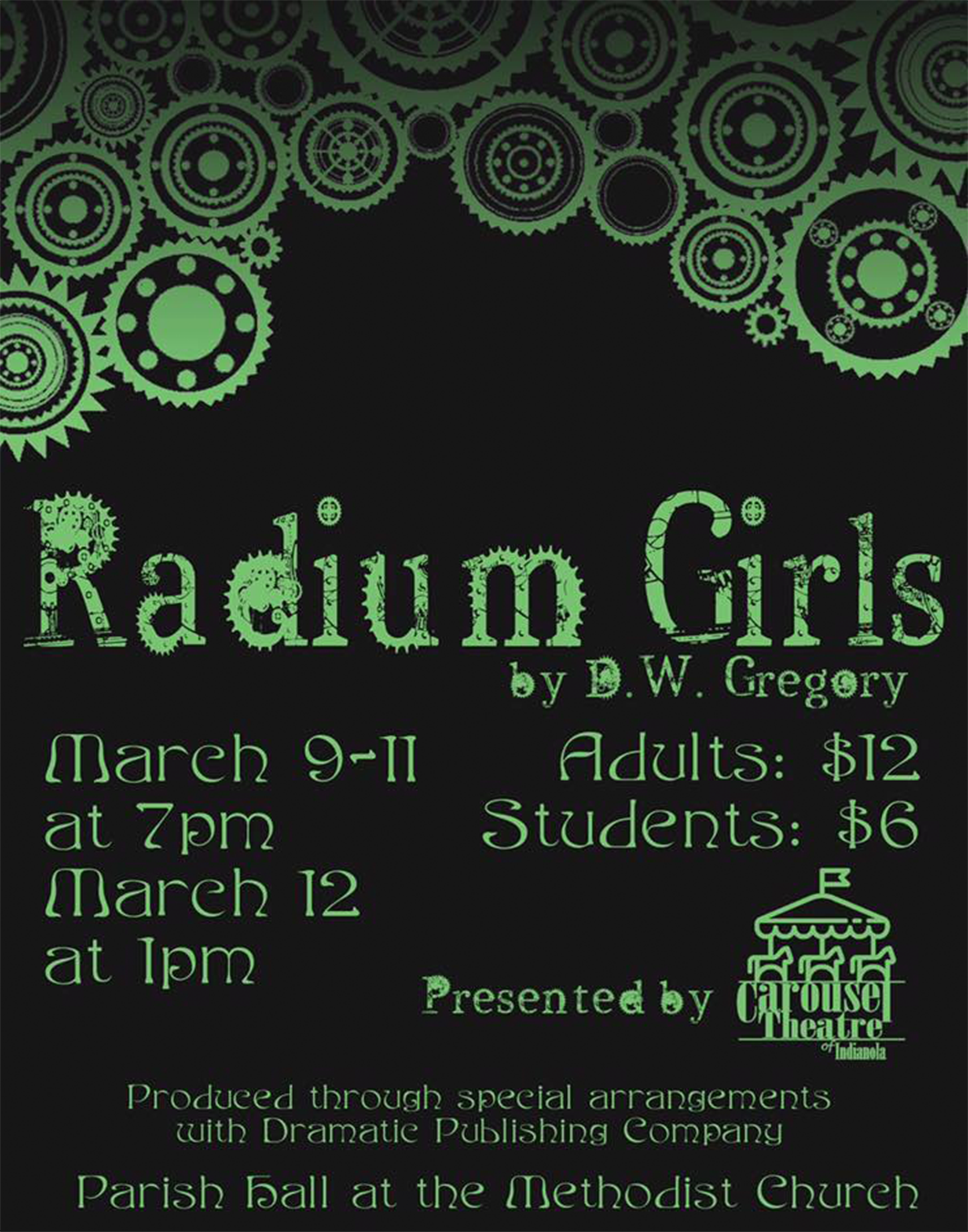 Inspired by a true story, Radium Girls traces the efforts of Grace Fryer, a dial painter for the US Radium Corporation, who seeks justice for herself and her fellow dial painters who were suffering from a rash of mysterious illnesses caused by the use of radium in luminous watches. 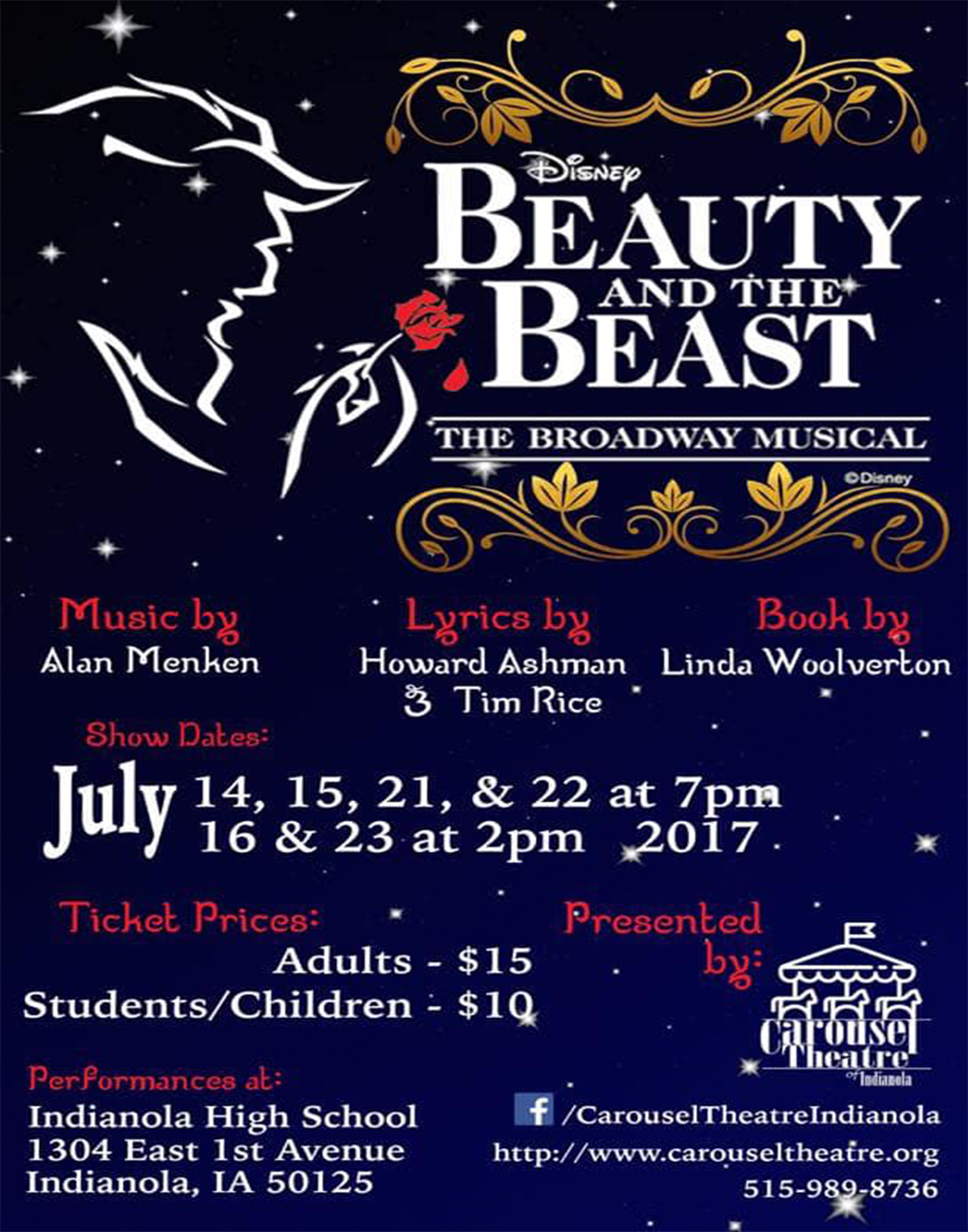 Disney's Beauty and the Beast

Disney’s classic movie, Beauty and the Beast, comes to life once again on the stage. Following the story of Belle and her dreams of finding adventure outside of her provincial town and the Beast and his quest to find someone to love and have love him in return. 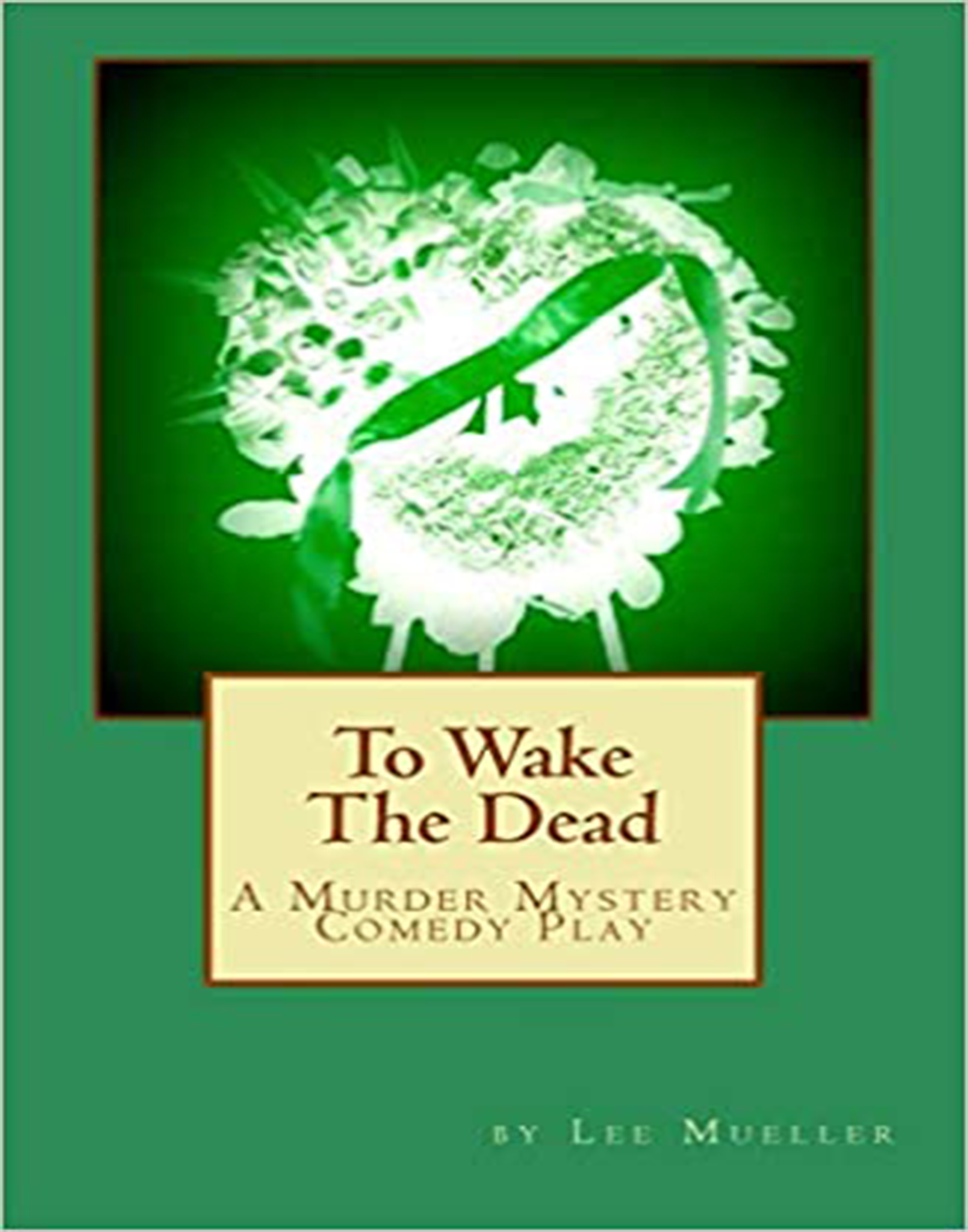 To Wake the Dead

Renown Mystery writer Fred Finnegan has died and all his friends have gathered at his wake. His agent, Lenord Elmore,  presides over the wake along with Fred’s widow Joyce. Along side a number other outrageous characters they must unravel the mystery of Fred’s death. 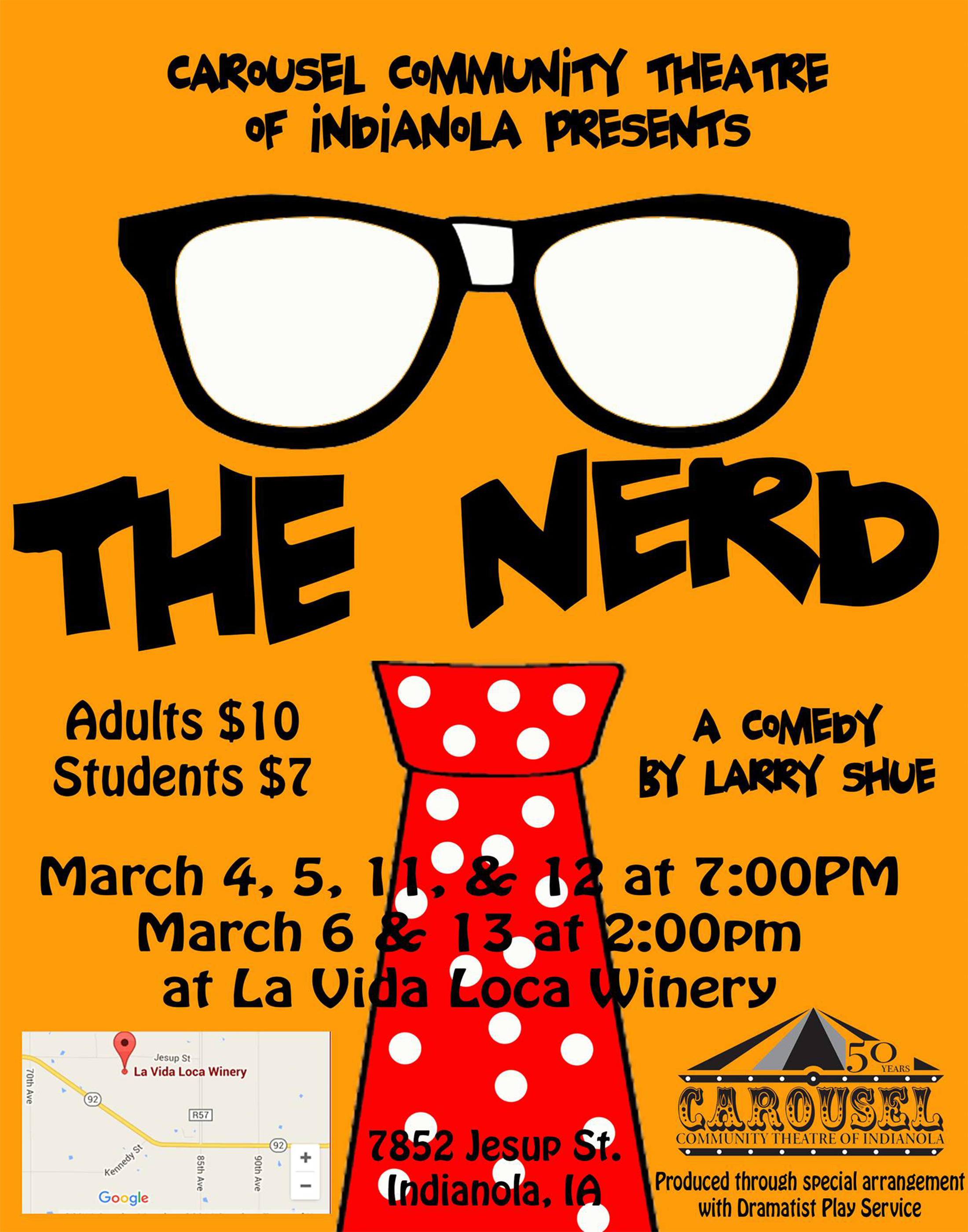 The Nerd centers on the hilarious dilemma of a young architect who is visited by a fellow ex-GI whom he has never met but who saved his life after he was seriously wounded in Vietnam. However, Rick’s awkward manner and inappropriate behavior throw the occasion into shambles. It turns out that Rick is a stupid nerd who overstays his welcome with a vengeance. 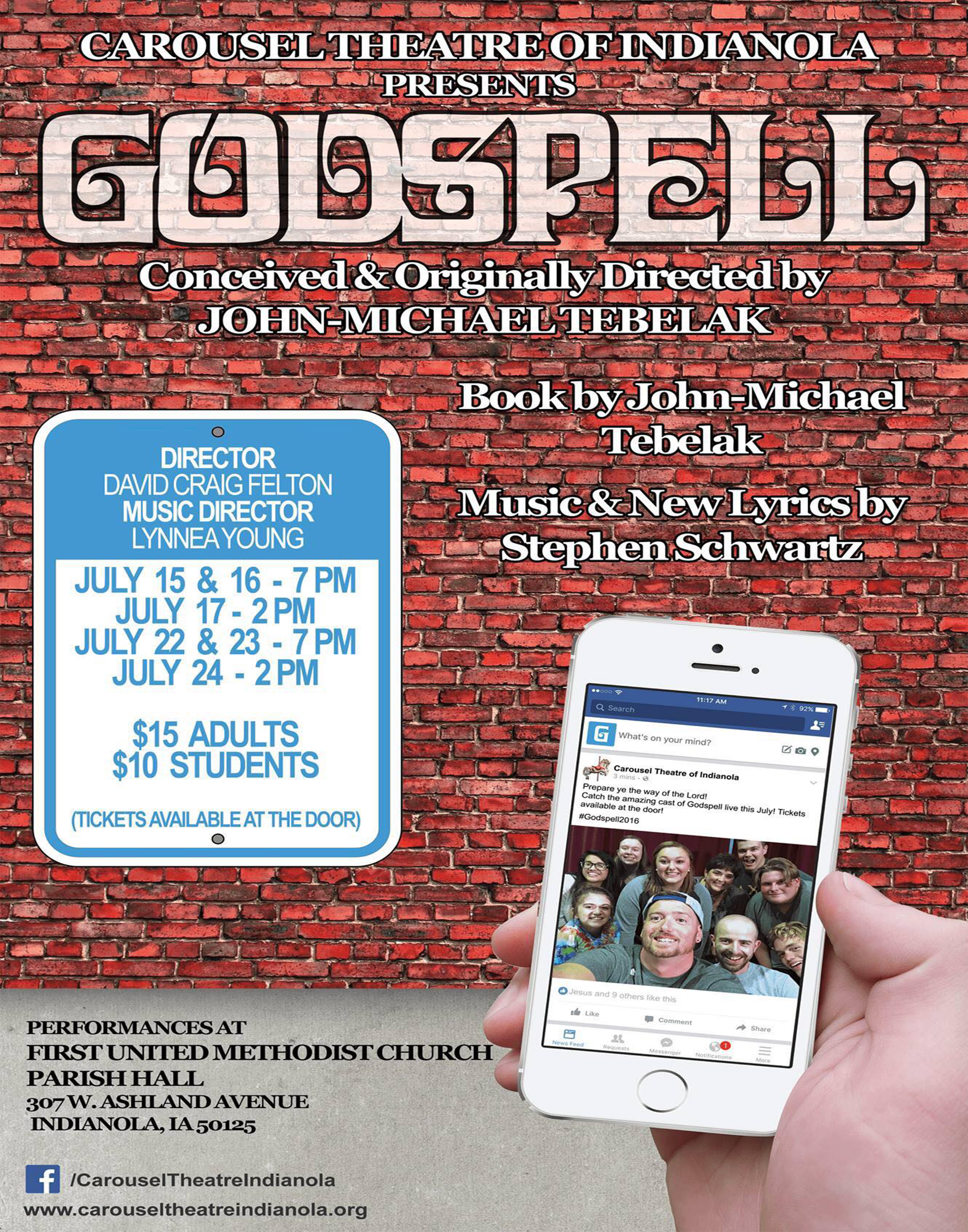 By: John-Michael Tebelak and Stephen Schwartz

A small group of people help Jesus Christ tell different parables by using a wide variety of games, storytelling techniques and hefty doses of comic timing. An eclectic blend of songs, ranging in style from pop to vaudeville, is employed as the story of Jesus’ life dances across the stage. Dissolving hauntingly into the Last Supper and the Crucifixion, Jesus’ messages of kindness, tolerance and love come vibrantly to life. 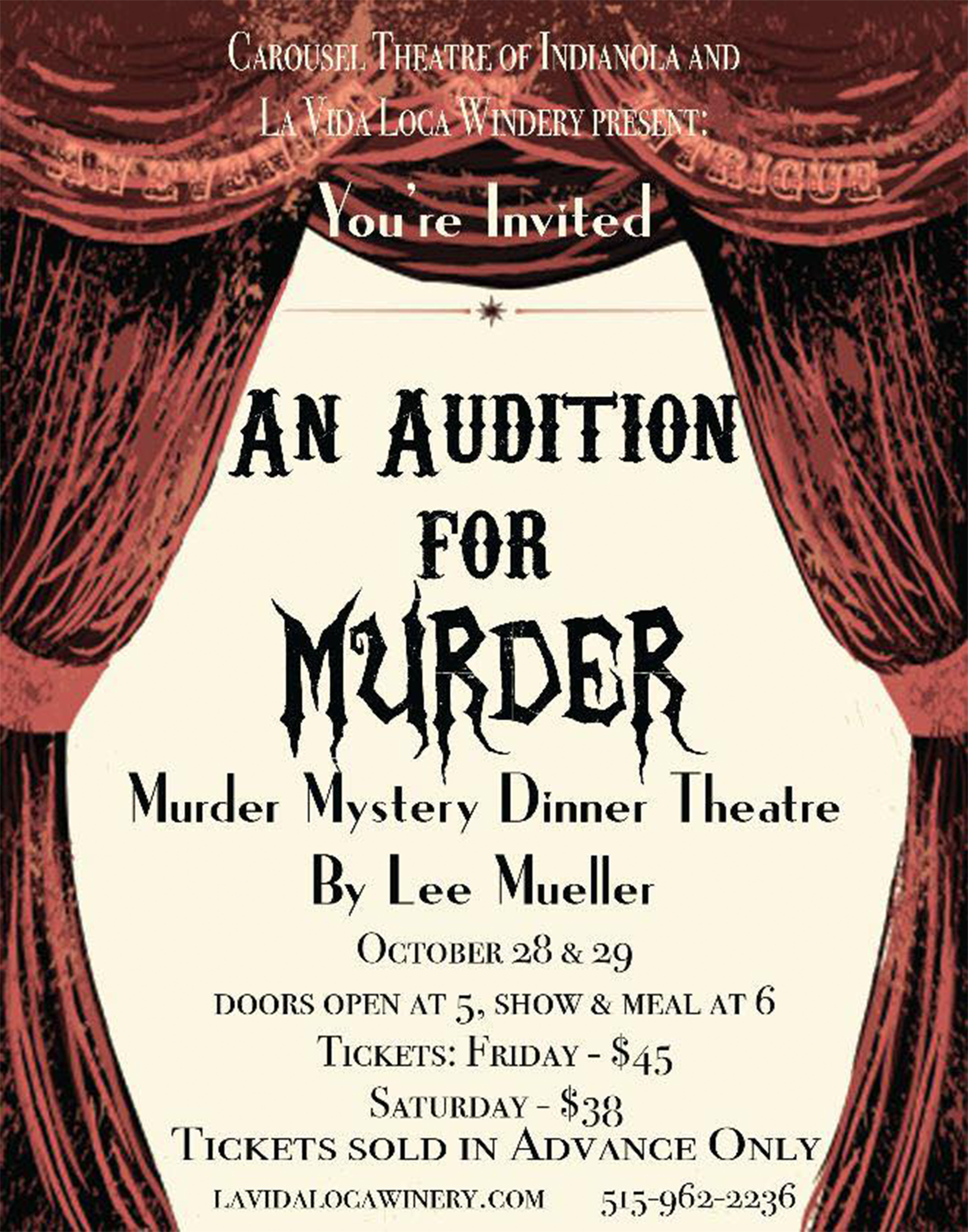 An Audition for Murder

A Theatre group is holding auditions for a Murder Mystery called “Death of A Disco Dancer” and all of the typical actors show up to audition. There is the militant method actress, the ditzy Drama queen, the energetic actor who never seems to get a part in anything, the accomplished theatre major, the ego-centric actor who always gets a role and his gorgeous assistant who holds his imported bottled water and carries his Portfolio and more. All seems to be going well, at first, until a mystery appears and it’s up to the cast and directors to solve it.